As November draws to a close, I realise just what an extraordinary month it has been. There have been so many acts of Remembrance and some of them have been truly thought provoking. I wanted to go to see the poppies at the Tower of London but failed dismally.

I console myself with the thought that I don’t feel that I have neglected the past this autumn. Two years ago I sat in church on Remembrance Sunday and realised I had never visited my grandfather’s grave. As anyone who has been interested

enough to spend time on this website previously may already know, he died on the Aisne in 1914. It was then that the plan formed to get as many of Billy’s descendants to his grave on the centenary of his death as I could. In the end there were 23 family and friends in Soupir Communal Cemetery in September this year.

We had spent the previous few days following the route of the Grenadier Guards as they retreated from Mons with Sir Douglas Haig’s I Corps south towards the Marne. There were several notable moments directly related to Billy. One was at Landrecies, south west of the vast Mormal Forest which the British thought was impenetrable – but the Germans marched straight through!!! So the town was not quite so protected by the forest as had been thought… the ‘Landrecies Affair’ was indeed quite an affair!

Following a 28 mile march in blistering heat the Grenadier and Coldstream guards arrived in Landrecies hoping for nothing more than a decent billet and a quiet night. However as it turned out the Germans had had the same idea and were also heading for Landrecies for a decent billet and a quiet night. Needless to say a fierce fight developed and it was not long before the Coldstream’s machine guns were being overrun.

At this point Billy, as the Grenadiers’ Machine Gun Officer, was ordered up to assist the Coldstream. The official history The Grenadier Guards in the Great War – Volume I describes what happened – ‘The machine-guns of the Grenadiers were moved up to help the Coldstream and came into action at a very critical moment. They were largely instrumental in repelling the enemy’s attack, and were well handled by Lieutenant the Hon W. Cecil, who was slightly wounded.’  Colonel Fielding (Coldstream) was more effusive, describing Billy’s handling of his guns as ‘magnificent’. Colonel Fielding continued saying ‘During all the assaults he stood up under heavy fire  from high explosive shells and directed the fire as if on manoeuvres. He was wounded in the knee but continued fighting…’

I suppose one of the things I wanted to try and discover on our journey through France was an answer to the question – why was he so careless of his own safety? In the ‘Great War’ the attrition rate amongst junior officers was proportionately higher than for any other rank. Trained ‘to play the game’ on the sports fields of English public schools, and inspired by the adventures of their warrior heroes of ancient Greece and Rome, they seemed determined to show no fear, and to lead from the front – and time after time they paid the ultimate price for doing so. Billy was lucky in Landrecies – but it seems almost inevitable that his luck would run out.

However, while we were following Billy and his Grenadiers, we were also uncovering the stories of several other soldiers connected with our group. There was Lieutenant John Lee-Steere (Grenadier Guards) who died at the hands of a sniper at Klein Zillebeke on 17th November 1914. He was just 19 and a dearly loved, only son. He is one of  just a few soldiers to have a different style of headstone, paid for by his parents. John was buried in the village of Zillebeke in what has come to be known as the ‘Aristocrats Cemetery.’

It was a particularly poignant part of our journey when we visited not just the cemeteries but the places where ‘our’ soldiers fought fell. The cemetery at Zillebeke was moving enough, but standing in the field where the Grenadiers had been dug in a hundred years earlier, and looking up at the woods…

so peaceful now, but then in the freezing mud and cold of the trenches, with the barrels of German guns blazing at him, it must have been a terrifying place for, the far too young, John.

Another soldier whose grave we visited was Captain Stuart Keppel Reid. He had seen service in Gallipo 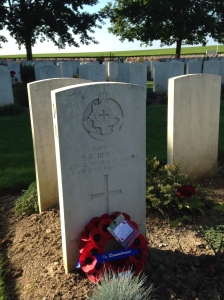 li, Gaza, Egypt and Palestine, survived numerous battles, and had been awarded the M.C. It was 1918 when the Royal Sussex crossed the Mediterranean and having landed in Marseille they soon found themselves entrained and heading north to the Western Front and Ypres. Home and safety must have seemed almost within touching distance when they arrived in Belgium. Maybe Stuart had some leave, maybe he even dared hope the war would be over and he would survive – after all he has survived so much already. Unfortunately the Germans broke through near Soissons in July 1918. Stuart soon found himself on another train heading south to help push the Germans back. On 29th July 1918, however Stuart died, having been wounded a few days earlier.

While I am, of course, sad that Billy did not survive the war, to have fought for four years and then to die when the war is edging to a close, seems even more cruel. Stuart was buried in Vauxbuin Cemetery.

The final soldier whose grave we visited was Captain Cecil ‘Johnnie’ Ker 1st Battalion Bedfordshire regiment. He was killed at Missy, on the Aisne on 15th September, just the day before Billy. The Bedfordshire War Dairy describes the action that day as a FIASCO in capital letters! It seems however that Johnnie Ker wasn’t killed in the fiasco… a diarist of the day reported… ‘I went up to the front to see what was doing in an interval and was quite close to Johnnie Ker who was sitting on a bank. He got up and stretched himself and yawned saying that he was tired of it all and wanted a good sleep when a sniper shot him through the head and he died at once. Almost at the same time, if not with the same bullet, H. Courtenay was hit in the eye but not killed. It was an awful blow losing poor little Johnnie’.

Such an unnecessary death due to a moment of carelessness shows the strain the past few weeks had put on the British. Weeks of retreat, marching, fighting, then marching again… followed by some hope that the war had turned at last only to find themselves halted in front of the wooded hills of the Aisne valley, had taken their toll. The men were exhausted, and Johnnie got careless and for that he paid with his life. Vendresse Cemetery where he is buried, is one of the most beautiful we visited, so I can only hope he is at peace there now.

Our journey from Ypres to Soupir is one I will never forget. It was memorable for so many reasons, and just the fun of spending time with family and friends that do not spend enough time together, was a joy. It made it even more special that we travelled with a purpose. There were lives that deserved to be remembered, and we took great pleasure, mixed with sadness of course, in the remembering.

I don’t know that I have yet discovered what drove these men to ‘do their duty’ with such flair and bravery. They all had huge courage, but no doubt they had tremendous fear too. I am just proud to have got to know more about all of them.  And as for Billy – I suppose I just wish he had survived, so many things in our family would have been different if he had. Losing him was losing a vital link in the chain that bound the Amhersts together. I also wish he had survived, because I would have loved to have known him… Strangely though through his letters, and through May’s journals I feel I do know him, really quite well – perhaps better than I know many people who are alive today.