A few weeks ago there was a message on my answering machine. This was unusual as for once it wasn’t from someone trying to sell me green energy or trying ‘to assist me to reclaim mis-sold PPI’. It was from someone who had discovered my website following his own discovery in his mother’s attic following her death. When he and his wife were clearing out th 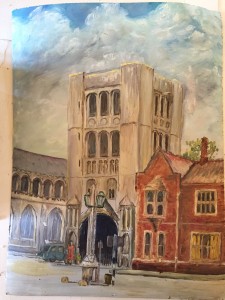 e attic, they had come across a picture which his parents had bought many years before.

This was a nice, but not particularly exciting oil painting of Bury St Edmunds Cathedral. It had long ago lost its frame and had been left forgotten in the attic for numerous years. 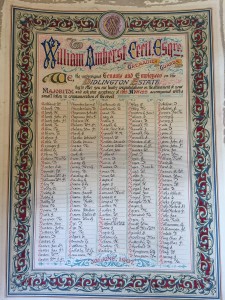 on the reverse there was a surprise – they discovered this beautifully illustrated  ‘Address’ which must have been presented to my grandfather to mark his 21st birthday, which was only shortly after he had joined the Grenadier Guards. It is ‘signed’ by all the workers on the Didlington Estate and is a wonderful and rather unusual piece of family history.

It is perhaps interesting to see just how many Carters were working on the estate at that time – exactly how they were related to Howard Carter is currently unknown.

Also exactly how the Address found its way to that Suffolk attic and how it ended up as the back of an oil painting of Bury St Edmunds Cathedral is a mystery – one guess regarding the painting is that during the shortages of WW2 someone wanted to paint the picture and the only piece of board available was the reverse of the ‘Address’. It is a miracle it survived undamaged, and it is a miracle that it has come home!

That it has, is entirely due to the internet alerting one kind person that I might be interested in it – I owe them a huge debt of gratitude for their persistence in tracking me down… thank you!

When worlds collide it can be spine tingling… Today I had just such a moment. As anyone who has even glanced at this blog before will know I have sheep. Cotswold sheep… from the Cotswolds. A historic a 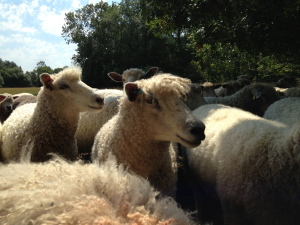 nd rare breed they may be and one that I happened to take on because their wool, their upturned mouths which make them look like they are smiling, their crazy forelocks, placid nature and their ridiculous hippo like size, well, just appealed to me. When I am not involved with sheep, or fiddling with Nile Cat I try to get on with my family biography. Cotswold Sheep and Biography are two completely different worlds… at least so I thought until today. 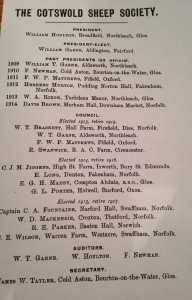 It was only when I went to collect some sheep in Hampshire and got chatting about the history of the Cotswold Sheep Society and I asked ‘Why Cotswolds?’ that the owner explained his great grandfather had been a member of the CSS and it had seemed right to keep them in the family. He showed me a page from the 1915 Flock Book and commented there were quite a few members of Council who came from Norfolk. We had discussed earlier that I’d been brought up there, so I was asked if any of the names meant anything to me…. I looked and there it was in black and white… ‘Captain C. A. Fountaine, Narford Hall, Swaffham, Norfolk. Elected 1915 – To Retire 1917‘.

It really was the strangest feeling reading that, indeed even heart stopping… Mary Fountaine was William Amhurst Tyssen-Amherst’s mother, and William (my great great grandfather) was born at Narford Hall. Narford Hall was just some sixteen miles from Didlington and for many years the two families were closely entwined. Sadly, when financial ruin hit the Amhersts in 1906, a large chunk of Fountaine money went too. There was a court case and I don’t imagine the  cousins saw much of each other after that.

But it does feel weird to know that there were Cotswold Sheep at Narford Hall in deepest, darkest Norfolk, and that a cousin of mine was a member of the Society of which I am currently Chairman, and that he too served his time on Council as I do nearly a hundred years later. Why did I choose Cotswolds… maybe it was just coincidence or maybe there is indeed more in heaven and earth than most of us can possibly dream of…?!

Anyway there is now a whole new field (!) of research for me to explore… and one question particularly intrigues me… what were all these Cotswold sheep doing in East Anglia? There were flocks near Bury St Edmunds, Fakenham, two near Swaffham, Thetford, and Norwich. In fact in 1915 there were more members on Council from Norfolk and Suffolk than there were from Gloucestershire. If any reader of this blog can shed any light on this – I would love to hear from you!